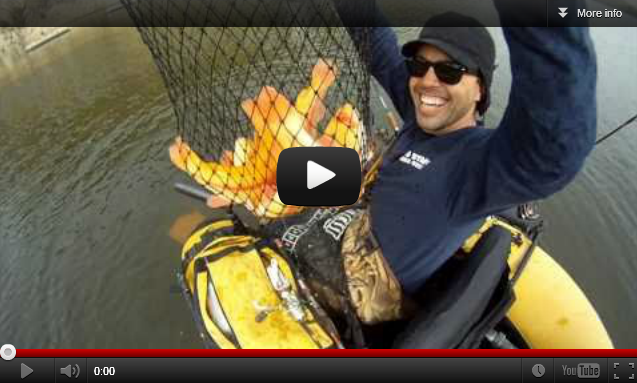 I, like many of you, have been having an absolute BLAST with the Lightning Trout this season. Besides being beautiful fish that are absolutely delicious to eat, their tendency to stay schooled up, hang out about 6 inches below the surface, and eat EVERYTHING that crosses their face makes me think that these fish want hooks in their mouths and to find themselves sideways on my dinner plate. It’s been a whole heck of a lot of fun taking part in killing a few of these gorgeous creatures and though I know it’s late (I’ve been “busy” to say the least!), I thought you guys wouldn’t mind seeing a video of some Lightning Trout carnage!!

I was out at Corona Lake on 3/17/11 mostly to help film the massive stocking of these fish that went down, hand out fliers for the event, and kick around the Lake preaching the good word about the Inflatable Navy. Notice that I said “mostly”…I think that it would be a sin to hit the water in a float tube without having a rod and reel on board and ready to go!! While the overwhelming majority of the day was spent discussing the in’s and out’s of the tournament, at about 3:30 the lake began to clear and I decided it was a good time to go put a bend in the rod. So I tied on a 1/32 oz white Lip Ripperz mini jig and made the kick down to the dam. It would be difficult to put into words what I was greeted with so I’ll let some sped up video footage tell the rest of the story! What a blast, it just doesn’t get any more wide open than this!!! ENJOY AND THANKS FOR WATCHING!!!