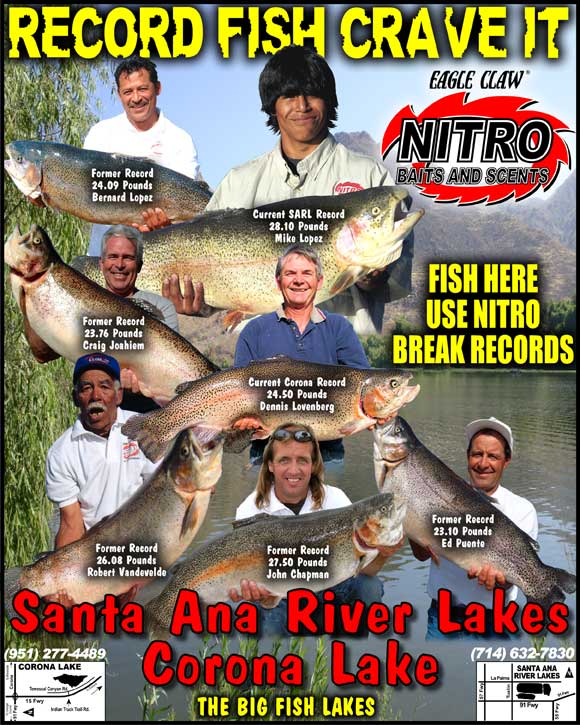 WHY DO THESE LAKES HAVE THE BIGGEST TROUT

EDITORS/WRITERS: This story is on the Mt. Lassen Trout Farms triploid trout that are planted in Santa Ana River Lakes and Corona Lake. Mt. Lassen provides the largest and finest trout available from any hatchery in the Western United States, perhaps the world, and this story explains how years of good trout husbandry, development of a sophisticated nutritional regime, and heat-shocking sterilization have led to the creation of this wonderful sportfish. We don’t believe any other fish planted in California has the health and vigor of these trout, and we know no one plants trout that can match Mt. Lassen’s biggest triploids.

Why SARL & Corona
have the biggest
rainbow trout

This desire has led Bill Andrews and Doug Elliott, owners of the concessions at both lakes, to contract with Phil Mackey’s Mt. Lassen Trout Farms in Red Bluff to provide the biggest and best rainbow trout available in the country to sport anglers. The Mt. Lassen Super Trout are unmatched in their health, vigor, and size. These huge, beautiful fish have broken the state record each of the past three years at Santa Ana River Lakes. And it’s likely that will happen again during this year’s trout season.
But why do they get so big? Why do they fight so hard? That requires some explanation.

These huge Super Trout have been called many things from “Super Fish,” “Behemoths,” “Monsters,” “Freakoids,” to just plain huge, trophy trout. But, the fact is they are “triploids.”

These fish have NOT been raised on hormones or genetically engineered. They are the product of decades of selective breeding, a carefully honed natural diet that recognizes the trout need different types of food and nutrition at different stages of their life, and perhaps most importantly, they are put through a process that sterilizes the trout shortly after the eggs are fertilized, and this is what makes them triploid.

This last step prevents the trout from maturing sexually or reproducing. Farmers and veterinarians have neutered animals and poultry for many years so they can reach their maximum growth potential in the shortest amount of time. While all animals expend great amounts of energy in reproduction, trout and salmon utilize so much energy that many die after spawning is complete. Even trout that survive the cycle are severely weakened. They lose weight, their meat becomes soft, and they are susceptible to a variety of diseases. By making the trout sterile, they do not waste energy growing eggs and trying to spawn. They can reach huge sizes.
“The main reason for that is they continue to eat and grow all winter long,” said Phil Mackey. “Regular diploids go into a spawning mode and they don’t eat much. It’s just very stressful on the fish, and they don’t have the stamina. Triploids are younger for their weight than diploid fish and they are generally a more fit fish, especially during the winter months.”

The sterilization process for trout eggs is done by subjecting the trout eggs to warm water about 10 minutes after fertilization when the eggs are first dividing. In normal, diploid trout, there are two chromosomes that determine sex, but because of the heat-shocking process, the trout develop with a third sexual chromosome that makes them sterile. These are triploids. Fishery biologists believe some of the huge fish caught in the wild are actually triploids. This sterilization process can occur under the right conditions in nature, happening about one percent of the time, according to some studies.

Anglers who are familiar with the life cycle of Pacific salmon know how the spawning process has a very profound, adverse effect on fish. The experience is so devastating that the fish goes through a wasting process where in the fish’s body disintegrates, eventually resulting in death of the fish. Trout are in the same family as Pacific salmon. While the rainbow trout’s reproductive cycle is not as destructive as for salmon, many trout do not survive the process. At the very least, the fish become aggressive, they are scared in territorial battles, their food intake diminishes, they loose weight, their tissue becomes soft, and they are more susceptible to disease. In addition, their metabolic processes changes, channeling energy into the production of eggs and sperm rather than maintaining and growing body tissue. As a result of these yearly reproductive cycles, rainbow trout are very rarely caught weighing in excess of seven to eight pounds in the wild, and even hatchery rainbows, without sterilization, can rarely be raised much bigger than the low teens in weight.

Perhaps more importantly, for nearly half the year, the trout are in a compromised physical condition. While spawning trout might be aggressive, they don’t have the health and vigor of sterile fish. For an angler, that simply means they don’t fight as well. For hatchery managers, sterilizing the fish avoids these devastating annual cycles, and raising large fish and even quality catchable-sized trout becomes more economical because they grow bigger, faster, and healthier.

Sterile trout are also important to Fish and Game Departments because it allows them to plant a sterile fish and supplement a fishery without interfering with native or wild trout — such as golden trout or cutthroat trout — in a watershed. Without fears of cross-breeding and diluting native stocks, sterile hatchery fish can safely be stocked in heavily fished parts of rivers or in lakes to provide greater angler opportunity and a trophy component.

Triploid trout are the ideal fish for recreational fishing programs, and Mt. Lassen Trout Farms was one of the first and most successful hatcheries utilizing sterilized trout. Mt. Lassen was one of the first to supply triploid eggs to Fish and Game Departments throughout the West who had not yet mastered the art of triploiding. Today, triploiding is performed in various species, including trout, steelhead, salmon, catfish, and grass carp. Triploiding is now being used by private and state hatcheries across the nation, including Washington, Idaho, Oregon, British Colombia, Utah, Colorado, and Minnesota.

The first time an angler sees a huge triploid trout, he’s likely to ask, “Is that a salmon?” Others exclaim, “They’re monsters.” Pete Thomas, a Los Angeles Times reporter, visited Mt. Lassen Trout Farms and noted the fish were abnormally huge and coined the name “Freakoids.”

But the fish are far from freaks. They are the pinnacle of trout husbandry and nutrition. They may be the most healthy, fastest growing, and most vigorous trout an angler will ever catch anywhere in the world. The staff at Santa Ana River Lakes’ simply calls them Super Trout.

While they earned that name for their size, they also are superior to most of the anglers who fish for them. You would not think that a trout reared in hatchery pond and feed daily would be a selective feeder, but the huge trout are rarely hooked on anything but the lightest of tackle fished by anglers using the most finesse. The big trout reject anything but the most natural presentations so you have to be an accomplished angler just to hook one. Then the hard part begins. A battle with a vigorous 20-plus-pound trout on two-pound test line is one that can last for 30 minutes or more while an angler slowly wears down the fish. More times than not the trout wins.

Last season a 27 1/2 pound rainbow was taken at Santa Ana River Lakes by John Chapman of Yorba Linda, Calif. But to give you an idea of how tough it is to land a 27 1/2-pound rainbow, Chapman’s fish looked like it had whiskers on its chin. With six hooks embedded in its mouth, all trailing shards of monofilament, the trout was a veteran of several battles when Chapman finally finessed the fish over the edge of a huge net.

Chapman’s big rainbow was the last of five trout that broke the California state record for rainbow trout caught at this Southern California water during a one year span. In all, there were 10 trout that topped the 23-pound mark landed at Santa Ana River Lakes over that year, and there have been literally hundreds and hundreds of 10-pound and bigger fish landed since Mt. Lassen Trout Farms has been planting its triploids in this lake.

How big can they get? Phil Mackey will tell you he really doesn’t know. “I’d have told you three or four years ago that 25 or 26 pounds was tops, but we blew right through that. We actually have had — and do have — trout that have bounced over 30 pounds, and I don’t doubt we can go over that,” said Mackey. “Where the top is, I don’t know.”

What anglers can count on for this year is that someone, perhaps you, will become the holder of a new state record for rainbow trout with a 28, 29, or 30-pound Mt. Lassen Trout Farms triploid rainbow trout caught at Santa Ana River Lakes.

Triploids on the Table

These triploids are only a few years old and their flesh is firm and they are great eating, especially when compared to a non-triploid fish of seven to eight pounds. A non-triploided trout would be much older, and their tissue would have been devastated by several years of reproduction cycles.

Some have wondered if triploids in the 20-pound class are good eating. Actually, they are far better eating since they are only three to four years old. Triploids really compare with salmon, which have not yet gone through the reproductive cycle. Salmon only three to four years old and weighing 15 to 40 pounds are considered delicacies. A 20-pound, pink-meated triploid is not only a trophy fish that is a challenge to catch, it is great eating, too.