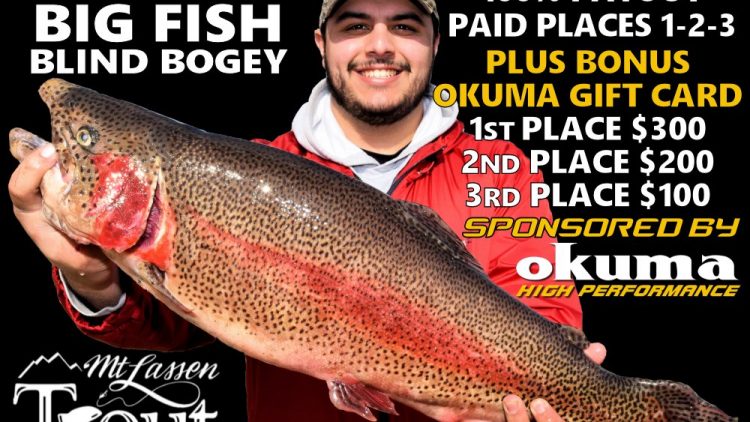 This Event is sponsored by Okuma and organized and managed by Santa Ana River Lakes.

HOW TO PARTICIPATE IN BOTH THE BIG FISH & BLIND BOGEY EVENTS.

To participate in the Tournament, the BUY IN fee is ONLY $20.00 and includes you in BOTH the BIG FISH and BLIND BOGEY Events. You can pay your BUY IN fee at the Tournament Registration Area BEFORE entering the Lake, NO EXCEPTIONS.  You will be given an arm band to prove your entry into the Tournament at the Tournament Registration Area. This arm band is good for both the BIG FISH and the BLIND BOGEY events. This arm band must be worn at all times. If you take it off or give it to another person, you and the person you gave it to will be automatically disqualified. Your Tournament BUY IN fee does NOT include Admission to the Lakes, which is paid separately at the Entrance Booth. TOURNAMENT REGISTRATION ENDS AT 8AM.

The Three Heaviest Trout weighed in before the weigh-in cut-off time of 2:00pm will be declared the WINNERS. Each Contestant may weigh in ONLY ONE Big Trout during the Event. Once you have weighed in your BIG FISH, you may NOT weigh in a larger fish later. You can weigh in your fish any time after the Tournament Director is prepared weigh fish in. A fin will be clipped on all fish weighed in the BIG FISH Event. In the event of a tie, the first fish weighed in, wins the tie. There will be NO RE-WEIGHS, once the weight is recorded, the weight is FINAL. All fish will be weighed on the Tournament scale ONLY. The Tournament Director will thoroughly inspect all three of heaviest fish and may also scan the fish with a metal detector to verify the accuracy of the weight of the fish. The Tournament Director’s decisions on all weights and qualifications are FINAL

Be in the Weigh-In Line by 2:30 SHARP for the Blind Bogey. You will be given a ticket with the weight of the fish you weigh in. A duplicate ticket stub with the same weight will be placed into drawing bucket. Ten (10) random weight numbers will be drawn from that bucket. Save this ticket and present it if your weight number is called out Ten (10) Winners will be selected by the weight of the fish the Contestants weigh in, and will split the Blind Bogey Prize Money, each receiving one 10th of the Prize Money. Based upon 200 Participants = $200.00 each! Any of the three BIG FISH Winners may ALSO enter their winning fish weights into the BLIND BOGEY Event. You may weigh in one fish, or any combination of fish up to five. All fish you weigh must be fish you personally caught. You may not share or borrow other fish you did not catch to obtain your Blind Bogey weight. The Tournament Director will call out the randomly selected weight numbers drawn from the bucket one at a time. If there is a tie, because two or more Contestants have the same weight numbers, the game “Rock Paper Scissors” will be played by the tied contestants to determine the final winner. The Tournament Director will explain and supervise the “Rock Paper Scissors” elimination game, and declare the final winner of the tied Contestants. You MUST be present to win. Claiming a prize of another person is NOT PERMITTED. The weight on your ticket must match the recorded weight for your name.

FREE RAFFLE: NO PURCHASE NECESSARY.
THE RAFFLE IS 100% FREE. ANYONE IS ELIGBLE TO REGISTER & ENTER FOR FREE. TO RECEIVE YOUR FREE RAFFLE TICKETS YOU MUST VISIT THE TOURNAMENT REGISTRATION TABLE DURING THE TOURNAMENT CHECK IN TIME (6AM – 8AM) TOURNAMENT REGISTRATION TABLE IS LOCATED BEFORE THE SANTA ANA RIVER LAKES GATE ENTRANCE. YOU MUST REGISTER YOUR NAME FOR YOUR FREE RAFFLE TICKETS.
RAFFLE be held right after Blind Bogey check in at 2:30pm.

Tournaments and the competition to win prizes can bring out the best and unfortunately sometimes the worst in some people. We hold these events with the hope that everyone will conduct themselves as true “Sportsmen”, help each other, and have fun. Anyone causing problems during the Event, or not following the Lake Rules will be eliminated from the Tournament and asked to leave the Lake. No REFUNDS will be given for either the Lake Entrance Fee or the Tournament Entry Fee, for those who are asked to leave the Lake.

By BUYING IN to the Event, you acknowledge that you have read and fully understand the Details and Rules of the Tournament and agree to be bound by such terms and conditions.

Now let’s have some FUN!!